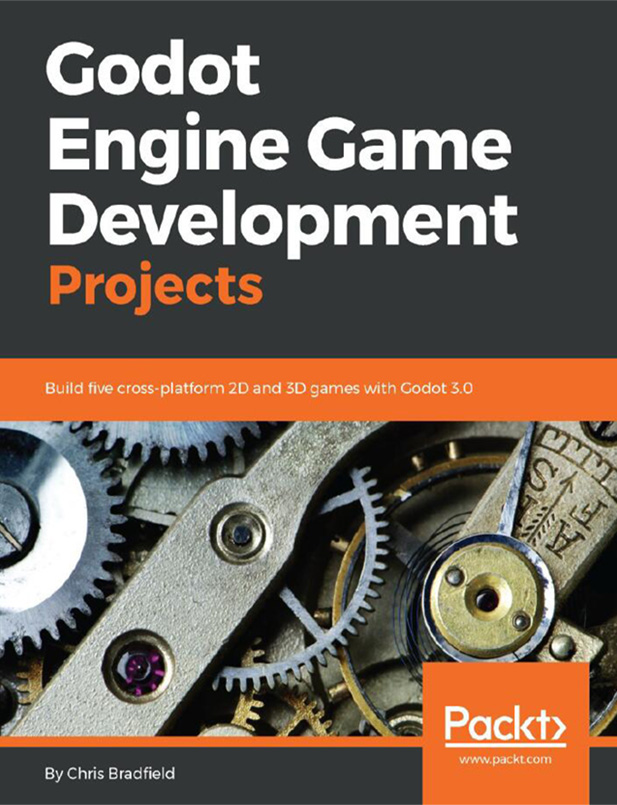 Godot Engine Game Development Projects is an introduction to the Godot game engine and its new 3.0 version. Godot 3.0 brings a large number of new features and capabilities that make it a strong alternative to expensive commercial game engines. For beginners, Godot offers a friendly way to learn game development techniques, while for experienced developers it is a powerful, customizable tool that can bring your visions to life.

This book consists of five projects that will help developers achieve a sound understanding of the engine when it comes to building games.

Game development is complex and involves a wide spectrum of knowledge and skills. This book can help you build on your foundation level skills by showing you how to create a number of small-scale game projects. Along the way, you will learn how Godot works and discover important game development techniques that you can apply to your projects.

Using a straightforward, step-by-step approach and practical examples, the book will take you from the absolute basics through to sophisticated game physics, animations, and other techniques. Upon completing the final project, you will have a strong foundation for future success with Godot 3.0.

Whether it’s your desired career or a recreational hobby, game development is a fun and rewarding endeavor. There’s never been a better time to get started in game development. Modern programming languages and tools have made it easier than ever to build high- quality games and distribute them to the world. If you’re reading this book, then you’ve set your feet on the path to making the game of your dreams.

This book is an introduction to the Godot game engine and its new 3.0 version, which was released in early 2018. Godot 3.0 has a large number of new features and capabilities that make it a strong alternative to expensive commercial game engines. For beginners, it offers a friendly way to learn fundamental game development techniques. For more experienced developers, Godot is a powerful, customizable, andÂ openÂ tool for bringing your visions to life.

This book takes a project-based approach that will introduce you to the fundamentals of the engine. It consistsÂ of five games that are designed toÂ help you achieve a sound understanding of game development concepts and how they’re applied in Godot. Along the way, you will learn how Godot works and absorb important techniques that you can apply to your projects.

This section contains some general advice to readers, based on the author’s experience as a teacher and lecturer. Keep these tips in mind as you work through the book, especially if you’re very new to programming.

Try to follow the projects in the book in order. Later chapters may build on topics that were introduced in earlier chapters, where they are explained in more detail. When you encounter something that you don’t remember, go back and review that topic in the earlier chapter. No one is timing you, and there’s no prize for finishing the book quickly.

There is a lot of material to absorb here. Don’t feel discouraged if you don’t get it at first. The goal is not to become an expert in game development overnightâ€”that’s just not possible. Repetition is the key to learning complex topics; the more you work with Godot’s features, the more familiar and easy they will start to seem. Try looking back at Chapter 2, Coin Dash, when you finish Chapter 7, Additional Topics. You’ll be surprised at how much more you’ll understand compared to the first time you read it.

If you’re using the PDF version of this book, resist the temptation to copy and paste the code. Typing the code yourself will engage more of your brain. It’s similar to how taking notes during a lecture helps you learn better than just listening, even if you never read the notes. If you’re a slow typist, it will also help you work on your typing speed. In a nutshell: you’re a programmer, so get used to typing code!

One of the biggest mistakes that new game developers make is taking on a bigger project than they can handle. It is very important to keep the scope of your project as small as possible when starting out. You will be much more successful (and learn more) if you finish two or three small games than if you have a large, incomplete project that has grown beyond your ability to manage.

You’ll notice that the five games in this book follow this strategy very strictly. They are all small in scope, both for practical reasonsâ€”to fit reasonably into book-sized lessonsâ€”but also to remain focused on teaching you the basics. As you build them, you will likely find yourself thinking of additional features and gameplay elements right away. What if the spaceship had upgrades?Â What if the character could do wall jumps?

Ideas are great, but if you haven’t finished the basic project yet, write them down and save them for later. Don’t let yourself be sidetracked by one cool idea after another. Developers call this feature creep, and it’s a trap that has led to many an unfinished game. Don’t fall victim to it.

Finally, don’t forget to take a break now and again. You shouldn’t try and power through the whole book in just a few sittings. After each new concept, and especially after each chapter, give yourself time to absorb the new information before you dive into the next one. You’ll find that you not only retain more information, but you’ll probably enjoy the process more.

What is a game engine?

Game development is complex and involves a wide variety of knowledge and skills.Â In order to build a modern game, you need a great deal of underlying technology before you can make the actual game itself. Imagine that you had to build your own computer and write your own operating system before you could even start programming. Game development would be a lot like that if you truly had to start from scratch and buildÂ everything you needed.

In addition, there are a number of common needs that every game has. For example, no matter what the game is, it’s going to need to draw things on the screen. If the code to do that has already been written, it makes more sense to reuse it than to create it all over again for every game. That’s where game frameworks and engines come in.

AÂ game framework is a set of libraries with helper code that assists in building the foundational parts of a game. It doesn’t necessarily provide all the pieces, and you may still have to write a great deal of code to tie everything together. Because of this, building a game with a game framework can take more time than one built with a full game engine.

AÂ game engine is a collection of tools and technologies designed to ease the process of game-making by removing the need to reinvent the wheel for each new game project. It provides a framework of commonly needed functionality that often needs a significant investment in time to develop.

Here is a list of some of the main features a game engine will provide:

In addition, there will be tools to assist with features such as networking, easing the process of working with images and sound, animations, debugging, level creation, and many more.Â Often, game engines will include the ability to import content from other tools such as those used to create animations or 3D models.

Using a game engine allows the developer to focus on building their game, rather than creating all of the underlying framework needed to make it work. For small or independent developers, this can mean the difference between releasing a game after one year of development instead of three, or even never at all.

There are dozens of popular game engines on the market today, such as Unity, Unreal Engine, and GameMaker Studio, just to name a few. An important fact to be aware of is that the majority of popular game engines are commercial products. They may or may not require any financial investment to get started, but they will require some kind of licensing and/or royalty payments if your game makes money. Whatever engine you choose, you need to carefully read the user agreement and make sure you understand what you are and are not allowed to with the engine, and what hidden costs, if any, you may be responsible for.

On the other hand, there are some engines which are non-commercial andÂ open source, such as the Godot game engine, which is what this book is all about.